Short history though it was, Radio Lutterworth evolved incredibly quickly, making its debut in the summer of 2006 under the guidance of Station Manager and mentor Frank Davis. 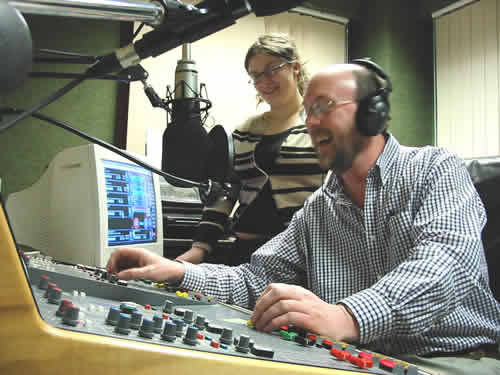 Radio Lutterworth broadcast to Lutterworth, Broughton Astley and the surrounding areas for the first time from July 17th 2006.

This was the first 28 days of truly local radio for the area. For a first attempt, and with 90% of the team having had no experience at all, it was a fantastic achievement. By all accounts it was also a notable success and all involved were justifiably very pleased with themselves!

After a follow up broadcast in the first half of 2007, Radio Lutterworth had a huge loss at the beginning of 2008 when Frank Davis sadly passed away. Determined to carry on Frank’s legacy, a new team was formed, and the 2008 broadcast was dedicated to the pioneering work and spirit of the station’s founder.

In order to always remember the contribution of Frank it was resolved that the main broadcast studio, wherever the station might be, would be known as “The Frank Davis Studio”.

Everyone at Radio Lutterworth started as a volunteer. Frank’s ambition was to see a radio statin working for the communities of Lutterworth, Broughton Astley and the surrounding areas providing a totally free local service.

A proportion of surplus funds raised (over costs) for the running of Radio Lutterworth were used to make charitable donations. The intention is to carry on Frank’s vision in setting up a Charitable Foundation as part of the Radio Station in order to be able to put something back into the community in which it operates.

Radio Lutterworth will continue in pursuit of Frank’s goal, despite the inevitable hurdles that have to be cleared, to provide a truly local radio service or the Lutterworth area. There is always a need for additional local volunteers, sponsors and advertisers who can share these aspirations.